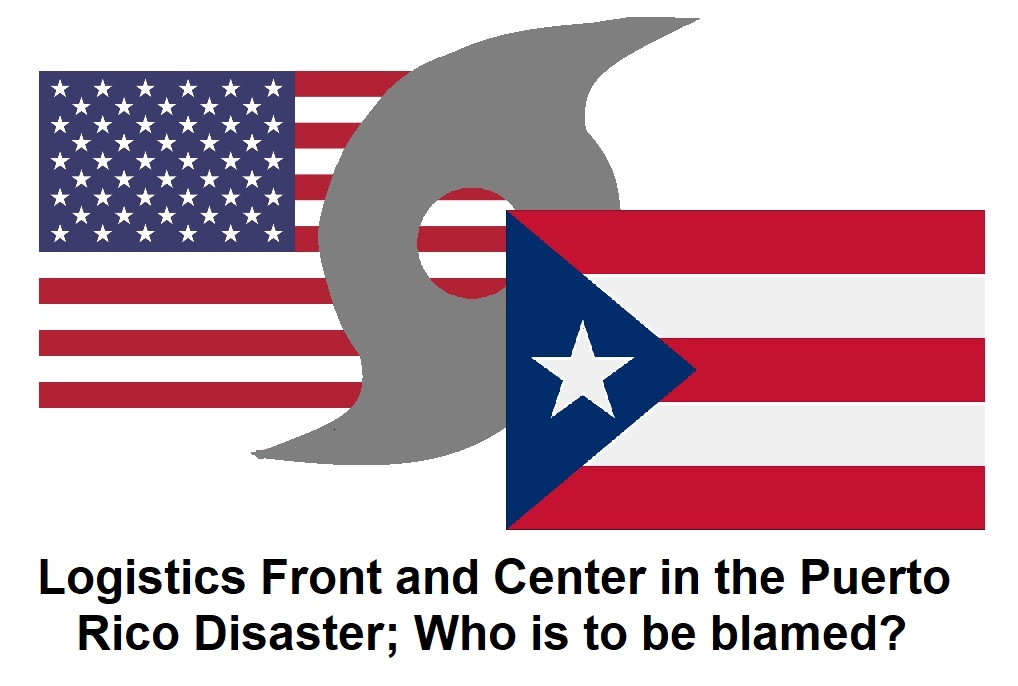 Following the devastation in Puerto Rico from Hurricane Maria, the media has reported numerous stories on how and why logistics have not been able to deliver needed relief supplies to the people throughout the island. Certain news organizations and politicians have been pushing a narrative of operational dysfunction on the part of the Federal government and the Trump administration. However, the major news organizations have ignored any mention of the systemic inadequacies and lack of preparation by the government of Puerto Rico.

The desperation of the people on the island was reflected by San Juan’s Mayor, Carmen Cruz’, emotional plea on CNN while wearing the infamous, “Help Us We’re Dying” t-shirt.  While the plea was certainly dramatic in its presentation, one can’t help but wonder why the warehouses full of supplies seen in the background were not already in transit to the people. Secondly, with the devastation of the island’s infrastructure and a total electrical blackout; how did the Mayor find the resources to have such a t-shirt created?

No one can fully predict the impact from an impending hurricane; however, local governments have the responsibility to prepare an emergency plan for immediate activation in times of crisis. Puerto Rico has been hit by powerful storms many times over the years.  This is not something totally unexpected for an island in the Caribbean.  What was the Puerto Rican Government’s disaster recovery plan?

FEMA, already dealing with the aftermath of two previous hurricane in Houston and Florida, had pre-positioned over 3500 personnel on the island five days before the projected landfall of Maria.  Again, popular media has been silent about the preparations made by private shipping companies, the Federal Government, and the U.S. Military in advance of the Category 5 storm.

Private shipping companies regularly employ contingency plans throughout the hurricane season to keep freight moving as efficiently as possible. Not only do they have to discharge cargo in transit, they also secure thousands of assets on the ground; relocate their ships to safe harbor, while considering the safety of their crew at all time.

For the people of Puerto Rico, the very same politicians who are questioning the Federal response and blaming logistics, should ask themselves some key questions regarding their own past decisions.  Most of the island’s infrastructure destroyed by the two back-to-back storms was already in a fragile state due to years of neglect, poor management of FHWA funds, and lack of investment in the port of San Juan; while politicians constantly downplay the island’s co-dependencies with the U.S. in advancing their agenda for the island’s independence.

It should be noted that since the late 1990’s, the government of Puerto Rico, in partnership with the city of Ponce, located on the southeast coast of the island, began the construction of a mega port designed to operate as a tax and customs-free international shipping hub. With a total project cost exceeding one
billion dollars to date, the port has remained vacant for the past 10 years.
During the same period, political pressure from the various independence parties resulted in the closing of the Roosevelt Roads Naval Air Station in 1999. This act, in itself, removed the vast majority of U.S. military personnel, equipment, and supplies that would have been critical to the people of the island immediately following Maria. Today, Puerto Rico’s debt totals more than $73 billion and the commonwealth filed bankruptcy in May.  A review of the recent history of fiscal mismanagement by Puerto Rico’s governing parties provides a better understanding of the island’s systemic logistics problems.

The initial criticism aimed at the Trump administration was the perceived delay in waiving the Jones Act for the island immediately following Maria.  After all, it was lifted for Texas following Hurricane Harvey along with Florida after Irma.  This criticism was misplaced, or perhaps purposefully mislead, by many in the mainstream media and opposition politicians.  Few have actually explained the purpose and the value of the Jones Act to the American public.

Dating back to WWI, regulations under the Jones Act were enacted to prevent enemy vessels from infiltrating U.S. ports and rivers. The act requires that all goods shipped between U.S. ports be carried by U.S. built ships and be operated by Americans. It also provides for the U.S Military to procure U.S flagged vessels in case of war.  Under the law, foreign vessels that enter U.S. ports are subject to taxes, fees and tariffs.  There are certain limitations inherent in the Jones Act that inhibit the development of competitive shipping options.  However, this subject has been debated throughout the years and the final verdict has always been in support of national security over commerce.

Both Florida and Texas faced immediate issues with fuel supply due to the disruption of mainland refineries and delivery pipelines. The only option to expedite fuel deliveries was from the nearest ocean carriers to the mainland. The situation in Puerto Rico was different, as the island had thousands of tons of fuel, water, medicine, food, and essential equipment that began piling up on the docks in San Juan immediately following the storm, only to wait for roads to be cleared in order for trucks to begin distribution across the island.  Until those supplies were moved out of the main port in San Juan, other vessels, American-flagged and otherwise, would have had to wait at sea for port space to clear.

This situation is not unique to the Island, as on any given day during non-crisis times, the local unions and truck drivers frequently block the San Juan Ports in protest of one grievance or another.  Politicians, historically, have done little to create a cohesive infrastructure on the island, nor develop logistical strategies for times of crisis. The destruction from hurricane Maria proved just how unprepared the local government was for an event of this magnitude.

As early as one week prior to the forecasted landfall of the storm, FEMA had already deployed a Federal Incident Management Team to the island that included members of the Department of Defense and the U.S. Army Corp of Engineers.  When Maria strafed the island on September 20, everything went down, including the power grid, cell phone towers, and banking system.  Even the Federal disaster managers, the professionals in charge of responding to hurricanes, were forced to evacuate the buildings where they had sheltered during the storm.  No one knew the extent of what had happened, or what was happening for days.

Following President Trump’s visit to the island last week, the actual extent of the Federal government’s relief efforts to Puerto Rico were revealed during a press conference that included reports from FEMA and commanding officers from all branches of the U.S. military currently on the island.  Puerto Rico’s Governor, Ricardo Rossello, and Senate President, Thomas Rivera Schatz, both acknowledged the accuracy of the reports in interviews following press conference.

As Puerto Rico continues to rebuild from the devastation of Hurricane Maria, the U.S Congress is about to take up a bill to approve additional aid to the island. This bill could include funds in upwards of $30 billion. This, coupled with the island’s existing $73 billion debt load, will most likely raise serious questions among many lawmakers, especially given that Puerto Ricans do not pay any Federal Taxes.  Now would be a good time for Puerto Rico’s politicians to reevaluate years of bad fiscal practices with expectations of bailouts from the U.S. Congress and chart their own plan for the future prosperity of the island.